VMware trends and what they mean for the enterprise

VMware trends remain a bellwether — as they go, so goes the enterprise. When the ServerCentral team went out to Las Vegas for VMworld 2018, it was with an eye on what’s changing and what it means for our clients.

The five-day event covers a lot of ground, and so did we.

There were 17 discreet product and service announcements made from VMware alone. That’s a lot of information and a lot of product development to digest in a very short timeframe.

We sent four of our experts to VMworld: System Administrators Garret Tomasek and Scott Evtuch, Director of Product Management Bill Mertka, and Senior Director of Managed Services George Nelson. They attended the panels, took in the keynotes and, most importantly, talked to their peers. Here’s what they learned, and what they think is coming next:

We’ve been beating the drum that the cloud should conform to your needs for years, so it was great to see the sentiment echoed at one of the biggest infrastructure gatherings of the year.

Garrett Tomasek: There was a significant focus on hybrid cloud this year. It’s clear that the right infrastructure solution for a company is unique to that company. The push to move anything and everything to the cloud has subsided, and people are taking a more realistic approach. If you have an application that’s structured in a certain way, you can keep that on-prem and still use cloud for the applications that benefit from it.

George Nelson: It was fascinating see how everyone has backed off from diving into the cloud headfirst. Instead of this macro approach, hybrid cloud has moved down to the micro level, going app by app, business element by business element, to see what should live where.

Bill Mertka: VMware really seems to be welcoming partners back into the mix and recognizing that there won’t be one answer. It really is a hybrid world. You can see that clearly with their inclusion of AWS solutions. Extending management, administration, and monitoring into the public cloud is really valuable for organizations, and that flexibility may well outweigh the costs for some.

Scott Evtuch: Hybrid cloud is so critical because it meets both the current and future needs of the enterprise. We’re seeing the lines between cloud and on-prem become really blurred — it’s really just a matter of where you need to run your workloads. In very short order, on-prem and cloud are going to look identical for application owners.

VMware technology trends toward the maturity of cloud

This year’s VMworld was focused on the ecosystem as VMware looks to grow and keep marketshare going forward. Service providers got a warm welcome at the event, as did the DevOps-minded. VMware’s decision to add support for Kubernetes, Pivotal, and containers shows that it’s trying to stay one step ahead of future shifts.

Bill: The major theme for me was how extensive VMware’s solution portfolio is and how advanced each of these solutions is becoming in such a short timeframe. The company’s focus on providing a complete and comprehensive ecosystem is readily apparent and well on its way. There is a lot of integration and delivery left to make it all a reality, but the pieces to create a full-featured solution are all there.

Scott: VMworld really emphasized an increased focus on the service provider sticking to its core competencies. If you wouldn’t cut down a tree to make your own paper, why would you approach your compute resources that way? The benefits of building your own infrastructure start to disappear now that service providers can do it so much more quickly, and with incredible levels of customization.

Garrett: I was really impressed with the commitment to vCloud Director and the quality of its release cycles. It’s clear VMware is putting its weight behind it, and that it’s really solid. The extensibility on it is really nice to see, it gives a great look into the directions the platform is going. Cloud Provider Pod, which automates the creation of vCloud Director environments, is another thing that’s just going to make our lives easier and improve the quality of the service we can provide.

Overall, I was just really impressed with the depth and detail provided in the beta demonstrations. It gave us a great sense of what is actually coming and exactly how it is progressing. We just have a clearer direction regarding how we want to incorporate future VMware technologies. The multi-cloud direction towards AWS is solid and something we’re looking forward to seeing. And we’re very cautiously optimistic about the HTML5 vCloud Director UX. Lots of people are impressed with it. The control it offers to service providers and to end users is more intuitive than it has been in the past.

George: You can see VMware trends pivoting from hosted offerings they run and maintain to turnkey services you can layer onto your own private clouds. They’re moving away from an all-or-nothing approach in favor of a services model that lets them be in every cloud.

VMware is trying to reshape its perception. They’re the enterprise hypervisor, there’s no disputing that. I don’t think, however, that you’ll see VMware launch a hyperscale. So their challenge is staying relevant in emerging markets. The sysadmin and the coder are becoming one and the same. This generation of CS majors now will be the first to grow up in a server-less world. Our generation didn’t want to deal with bare metal, so we created the cloud. Now you’re seeing the beginning of the next revolution. This new generation doesn’t want a virtual environment that mimics the bare metal they’ve never used. They just want to run the code and have it stored in a database somewhere.

Cloud is whatever you perceive it to be, and VMware is trying to get in early. The Kubernetes support, the Pivotal support, even the early adoption for container support — you can see VMware working to capture the workload no matter the format.

The DevOps culture shift is coming for everyone

If the new features and support didn’t make it clear, the conversations at VMworld did: the DevOps shift is happening, and everyone needs to adapt.

Bill: The intersection of DevOps with traditional enterprise IT was top-of-mind for almost everyone I spoke with. Automation and continuous integration and deployment are very clearly changing the culture. The choices people need to make — individual personal career choices — are far different now than they’ve ever been in the enterprise IT industry.

George: For me, the shift to DevOps was challenging, because I’m not a coder and didn’t come up with the CI/CD model. But there are clearly things we as an industry can learn from DevOps, like the high trust model and introducing automation.

At ServerCentral, we’ve been working through this transition for a while, and helping our clients do the same. The trick is to start small. Pick one thing, like recognizing interrupts or the constraints of a project, then work on that. If you look at the success stories, you’d think it was easy, but the truth is that everyone starts small. Because you have to change your culture. You’re not just talking about tech changes, you’re talking about culture changes.

Scott: Infrastructure as code is no longer a “nice-to-have” — it’s the starting point. Devs expect it and stakeholders demand the immediacy it offers, so we’re already there. When I was speaking with VMworld attendees, infrastructure engineers were hesitant and confused about what technologies like Kubernetes means for them and how DevOps fits in their enterprise. It’s looming large, and I know it’ll be something we continue to help our clients with for a while.

Security is a priority — and it will touch everyone

That security would be featured prominently at VMworld was no surprise. That it would be treated so holistically, however, was a welcome change. VMware’s new tools make it clear: no one can afford to ignore security anymore, no matter their job title.

Garrett: VMware’s AppDefense demonstration was really nice to see. It’s so seamlessly integrated with the entire environment. With all the development in the SIEM arena right now, it was good to see VMware take that step.

Bill: The whitelist vs. blacklist approach to AppDefense really spoke volumes to how deeply VMware is thinking about security, and the role developers, end users, and employees all play in it. Security has implications throughout the entire organization, and it will likely materially impact everyone, whether they’re interested or not.

Integrations are powerful, but relying on one ecosystem has drawbacks 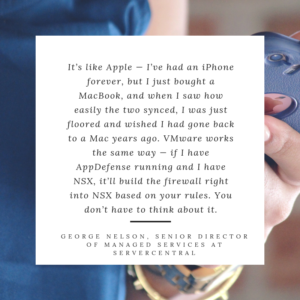 You may love your iPhone, you may love your MacBook, and you may especially love how the two seamlessly connect. But what if Apple decides to ban Google from all of its devices? Now you may be stuck with an ecosystem that can’t perform one of the primary functions you need it to.

VMware is no different, and it’s our job at ServerCentral to figure out how to weigh convenience against dependency.

George: It’s a huge balancing act. There are big benefits if you dive into VMware headfirst. There are third-party products that extend functionality, and VMware is adding new features every day. If you’re fully in a VMware environment, something like AppDefense runs under absolutely everything you do and is a great tool to have in your back pocket. But if priorities change, you are stuck. Is that an acceptable trade-off for ease-of-use? I don’t think we’re going to know that for a while.

Bill: There’s still a lot of integrating to do, but it’s clear VMware has a plan to make this ecosystem a reality and provide the extensibility exactly where customers want it should they not choose to use the native VMware solution.

George: Service providers used to pick and choose their technologies to find the best of breed in every category. Now, with all of these options, features, and tighter integration, it’s hard to resist the allure of integrating with VMware. It’s like Apple — I’ve had an iPhone forever, but I just bought a MacBook, and when I saw how easily the two synced, I was just floored and wished I had gone back to a Mac years ago. VMware works the same way — if I have AppDefense running and I have NSX, it’ll build the firewall right into NSX based on your rules. You don’t have to think about it.

If VMware continues to make its tools extensible, as they appear to be, then moving to VMware makes sense. The market expectations have changed to the point where “good enough” has really become great. If a fully integrated VMware system is “good enough,” it’s probably the right choice for a lot of clients.